The new display at Auburn's Schweinfurth Art Center rambles through several rooms, presenting work by 65 artists. An exhibition this large inevitably offers contrasts in media, subjects, and artistic perspective. However, the 2014 edition of Made in New York has its own imprint. There's interest in small pieces, in distinctive approaches to familiar subjects, in photos which make up one-third of the show's portfolio, and much more.

Lana Slinkard's Sins of the Centaurs,' a small bass-wood sculpture, portrays a moment of frenzied violence, of tooth-and-nail combat. Made in New York also encompasses Sangeun Yu's 'Unit of Amusement-Tollgate,' with its very different take on a row of toll booths. The acrylic sees the booths not as purely functional objects but as architecturally interesting in their own right.

In Karpet (Red),' Jackie Branson uses carpet, usually considered a key element of a living room setup, and integrates it into a provocative sculpture. There's a piece of carpet in the background, protected by a barrier made up of circular saw blades and other metal items. The piece suggests that sometimes it's necessary to defend a home.

More than 20 photos hang on gallery walls, providing an informal survey of contemporary photography: color as well as black-and-white images, silver-gelatin and inkjet prints, and digital images. The pieces range from Jo Gravely's straight-up, well done 'Crow Skull and Nest,' to Paul Pearce's 'Sharp Shooter,' another of his photos discussing war, violence and culture, to Sarah Pfohl's Pines before Mother,' part of a series featuring her mother. Meredith Cantor-Feller's 'American God of Risk and Release,' a digital image, is a work full of ambiguity. Indeed, it takes two or third viewings just to consider the possibilities posed by 'American God.'

For 'Nesting Vessels,' Raphael McCormack fashioned the seven-segment artwork from pulp made from abaca fiber, woven wire, and willow sticks. The 'nests' come in various sizes and seemingly bridge art and nature.

Nancy Callahan created a large piece with a long title: 'Mechanized Shorthand Device Plucked from a Stenographer's Dream.' It incorporates wood, paper, glass, metal and found objects, and taps into the notion of an inventor's fantasy. The work earned Callahan a best-of-show award.

The 2014 exhibition, like its predecessors, displays pieces by artists living in Rochester, Syracuse, Brooklyn and other New York locales. It also reflects decisions made by a new set of jurors: Kim Waale and Michael Sickler. They chose a portfolio with few videos and large installations, a bunch of photos, and a number of high-quality sculptures that help boost the show's energy. The Empire State-centric show keeps changing each year, and that's a key aspect of its appeal. 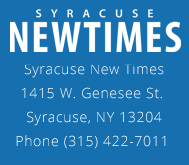